Description:
The student leadership award recognizes a student currently pursuing a post-secondary degree who demonstrates leadership and outstanding commitment to the Ottawa Jewish community. Nominations are solicited on an annual basis.

All nominees must have volunteered for a minimum of 3 years and be currently involved. Additional criteria for consideration includes:

Nominees must be a member in good standing of the Jewish Federation of Ottawa (minimum gift to the Annual Campaign) and cannot previously have received this award..

To be considered, nominations must include 2 letters of support, including one from an organization. The nomination must specifically address the above criteria.

Nature of the Award:
A gift of a mezuzah and a framed certificate will be given to the award winner. 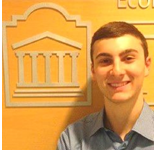 Please email nominating form and supporting documents to info@jewishottawa.com or drop them off in person to the front desk of Soloway JCC,  Federation Chair of the Community Award Selection Committee.

2018   Jewish Student Leaders at the University of Ottawa